Extreme heat and wildfire smoke when combined together has a health impact greater than their effect when just alone, according to recent studies.

Now, researchers from the United States have found this hazardous duo affected roughly 16.5 million Californians or almost half of the state’s population during the 2020 fire season.

The period marks a combination of dry conditions and wildland fires in the state.

The new research led by the University of California, Los Angeles (UCLA) claimed that 42% of Californians that time were reportedly exposed at least once to extreme temperatures and high concentrations of “fine particulate matter” from the fires.

In particular, residents in areas with a lower population density near wildfire-prone forests were disproportionately affected, opening avenues of the real impact of the event.

In the 2020 fire season, simultaneous smoke and heat affected 68% of California’s total land area between June and November of that year, according to the study’s lead author Noam Rosenthal.

A doctoral student at UCLA’s institute of the environment and sustainability, Rosenthal emphasized that the health hazards are “not just one plus one equals two.”

In recent years, California has been a hotspot of recurring wildfires and extreme heat, confirming findings of previous studies that climate change is taking a toll in the drought-stricken Western United States, where The Golden State is situated.

While there have been reported instances of rainfall, the state and its firefighters have been in a constant struggle to battle raging fires, which some were caused by humans. 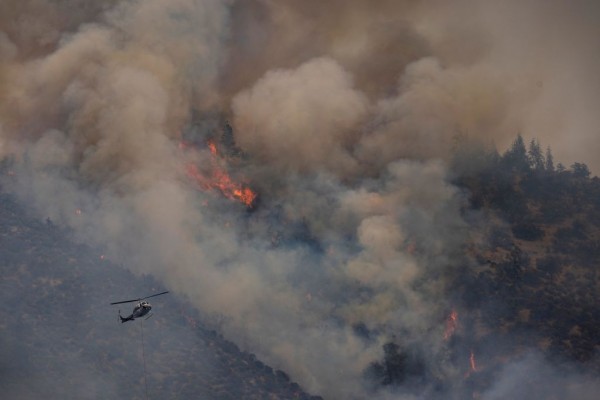 UCLA researchers published their findings in the journal Environmental Research: Climate on Thursday, August 25, where they assessed the population co-exposure to extreme heat and wildfire smoke pollution in California during 2020.

Rosenthal, along with other experts, acknowledged that excessive warming or global warming from climate change has elevated the total wildfire burned area over the past several decades in California.

With this, increased population exposure to both hazardous concentrations of the airborne pollutants from the wildfire smoke and extreme heat events.

The research team concluded that such exposure are associated with negative health impacts, citing recent epidemiological evidence to point towards synergistic effects from concurrent exposures.

To determine the potential effect of the natural elements, the team focused on fine particulate matter from wildfires alone, excluding other sources of air pollution such as from vehicles and power plants.

The results yielded that that fire-related particles can deeply penetrate a person’s lungs, making it harmful to respiratory health, Phys.org reported.

The health repercussions of the combined hazards are not fully understood yet.

However, Rosenthal pointed out the compound effects could aggravate the heat exposure and smoke exposure of a person, vice versa.

Although the study is confined in 2020, related phenomenon is likely to continue.

Since January 2022, Californians have experienced one of the most hottest summer in years, marked by heatwaves, severe drought, and extreme wildfires, according to the Los Angeles Times.

Cal Fire also reported the worsening case is evidence since 2020.

Related Article: California Cools Down After Experiencing a Period of Intense Heat